So, who exactly is this Josiah guy?

“Oh, how I love your law! I meditate on it all day long. Your commands are always with me and make me wiser than my enemies. I have more insight than all my teachers, for I meditate on your statutes. I have more understanding than the elders, for I obey your precepts. I have kept my feet from every evil path so that I might obey your word. I have not departed from your laws, for you yourself have taught me. How sweet are your words to my taste, sweeter than honey to my mouth! I gain understanding from your precepts; therefore I hate every wrong path.” King David, in Psalm 119:97-104

How many of you have read the Bible cover to cover? I must admit, that it wasn’t until I was in my 30’s that I read it from Genesis to Revelation. I had tried to read it, but by the time I reached Deuteronomy my enthusiasm waned with each new list of laws and genealogies. It was at a retreat with a college ministry I led in my 30’s, that I met a man named Tommy Oaks. He was the speaker at this retreat and a professional story teller- which was something I didn’t even know you could be! He was (and still is!) an incredibly interesting and inspirational man. You can find him at www.tommyoaks.com. This particular weekend he was sharing about the idea of feeding yourself from God’s word. The title of the retreat was “Bye Bye Bottle”. He reminded us that while it is appropriate (and even adorable) when babies are hungry and fed with “airplane” and “choo choo train” sounds, that the same behavior in adults would be just plain STRANGE. He related this to how fun it is to teach and feed brand-new baby Christians from God’s word, but how disturbing it is when a Christian of many years still expects to be fed by others. He talked about how adult Christians should have sampled all the flavors of the Bible, have favorites and have special places and times when they are refreshed by, and feed on God’s own words. He asked a group of about 40 of us if any had ever read the entire Bible and sampled all that God offers us for growing in him and knowing him. Not one person raised a hand. Including me. He asked us if we ever felt like we had little idea about who God is or what His overarching plan for man really is- and then he asked us this: “Do you think if you took a year and read through God’s whole word that you would know Him better? What if you did that every year? How well would you know him after 20 years? 50?” I was deeply convicted by this, and I left the retreat with a commitment in my heart to read through God’s word to get that overarching picture of Him every year. I’ve done this for more years than I remember now- and God has changed me. In ways that I can’t even understand. I have developed such a dear friendship with Him, and at the same time such an awe of his power and authority. He has brought over 100 people along with me over the years. We have met in churches, living rooms, coffee shops and even in the workplace. We read each day and gathered to discuss each week. We prayed that God would teach us, and He was (and continues to be!) faithful. I say all of this to encourage you to read His Word. I remember Tommy saying, “We don’t set out to not read the Bible. We know we need to, and we actually want to. We don’t read the Bible because we don’t have a plan.” I also say this because I want to tell you about Josiah Venture, and to do that I need to go into the history of Israel given to us in the Bible. Many times, when I ask a small group or Sunday School class if they know about King Josiah, I get blank stares. Dear friends–this should not be!!!  As followers of Jesus, we should know our history and the history of God’s dealings with man. We should be learning from the lives lived before us, about who God is, what pleases and displeases him, what pitfalls others have tumbled into, and how to avoid those. We should be seeing change in our lives because of the time spent before God in his word. I’m jumping into the middle of a fascinating story here (you should read the whole thing in 1 and 2 Kings and Chronicles!)  King Josiah’s story starts in the city of Jerusalem, in the kingdom of Judah. A century of bad leadership, including Josiah’s father Amon, led up to his reign. When Josiah was just 8, his father was assassinated and he became king as a young boy. By age 15 he began to seek God, and he quickly decided to strip Judah of all the idols that people worshipped instead of the one true God. At age 25 he decided to rebuild the temple of God, which had been long ignored and had fallen into disrepair.

During the restoration of the temple, someone found a scroll, and it looked important, so it was brought to the king and read in his presence. It was God’s law (the 1st 5 books of the Old Testament). Josiah realized immediately that they were in terrible disobedience to God and he was grieved. He immediately set out on a campaign to bring the nation into obedience of God’s instructions. He gathered all the people together and read God’s word to them aloud and called them to make a commitment to follow God’s instructions. The people agreed. What followed was a sweeping reform of the nation to bring them into worship, obedience and reverence of God. That is King Josiah’s story. Many years ago, Communism swept into the countries of Eastern and Central Europe and a wall was built- not just between the east and the west, but between man and God. Following and openly worshipping God became illegal. Over the years, many people forgot Him. Many turned away. The knowledge of God’s love and His word were smothered by government. In 1989 the Berlin wall came down, and the restrictions on seeking and serving God were lifted, but God had been forgotten by most and there was little understanding of him. But there were a few who still sought God and found Him. Josiah Venture has spent the last 20 years looking for those few and investing in them. We call them “Young Josiahs”, because they will be ones God uses to turn these nations back to Him. They will read and teach God’s word to their people. They will tear away the idols set up in His place. They are the future movement of God in Eastern and Central Europe and as we “venture” out to find them and invest in them and their local churches, we pray God will cause revival in these countries, and that all that was lost in those Communist years will be regained for his Kingdom- and more. Let me introduce you to some of these young Josiahs:

This week, in the Czech Republic, Josiah Venture held training for new missionaries. What is incredibly special about these missionaries is that each of them are nationals. They are from countries all over Eastern and Central Europe, and God has called them to reach their own people for Him. They are stepping out in faith to reach the 99% of people in the country they live in for Jesus. Makes me smile. Be praying for them as they raise support and continue to be equipped for God’s work! 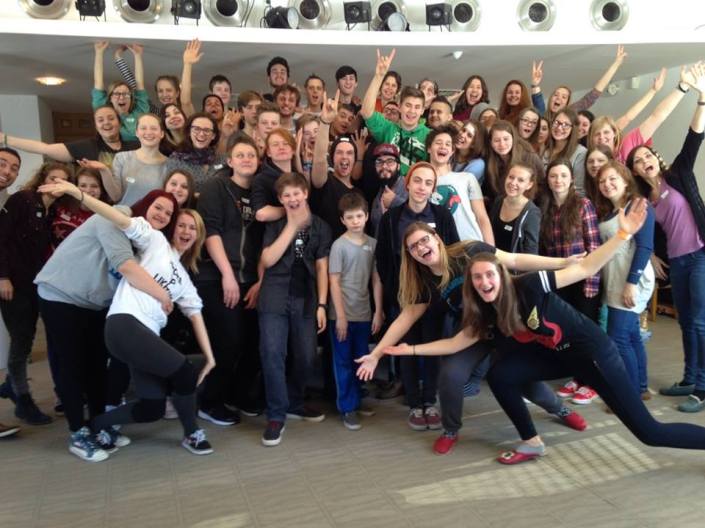 Another big event this week involved Josiah Venture’s Fusion program. Fusion is a ministry that provides training in music to young people, with the goal of sharing Jesus with them. Local schools excel in academics, but don’t offer extras like music, so our missionaries are able to step in with this and students love it. You can read more about Fusion here. Fusion is only in a few JV countries right now, but this week we launched Fusion in the country of Poland. The leader is a missionary from Fort Wayne, Korban Miller. He and his wife Tanya (and 4 kids) moved to Poland in 2013 and have been learning the language and getting connected. Now, the ministry they left home to start has been launched. Fusion groups from all over the JV countries joined as one to help them get started this week and the energy and excitement…well. You should just see it for yourself in this video made by Slovenia’s Fusion program. Just click on the image to watch. It will make you smile. I promise!

Please pray dear friends! God is moving in young lives this very moment in these 14 countries. Pray that these young Josiahs will have courage and strength to stand for Jesus in the midst of nations that are far from him. Pray for these new missionaries as they step out in faith to serve God. Pray for the missionaries like Korban, who are raising young families in a foreign country because God has called them to reach young lives for His kingdom. I’m so thankful for each of you and your prayers and support. God is using you to make a difference!!!