“Don’t let anyone look down on you because you are young, but set an example for the believers in speech, in conduct, in love, in faith and in purity.”  1 Timothy 4:12

I love those instructions that the apostle Paul gave to a young Timothy. I love to see God call people, at a young age, to fully surrender their lives to Him in service to His Kingdom.

Have you ever read biographies about people who fully and completely surrender to Jesus from a young age? I have three favorites.

The 1st follows the life of a young man named Brother Yun in China. His hunger for God’s word is remarkable, and the suffering he endures to spread the gospel reminds me that I never have reason to complain in my comfortable Christian life. The name of the book is The Heavenly Man

The 2nd is the story of a 19-year old Bruce Olson as he lived among a primitive tribe of Indians in Columbia named the Motilone, and is kidnapped by communist guerrillas. The book’s name is Bruchko

, and it is one of the most inspiring and harrowing stories of faith I’ve read. It could be a movie.

The third is the life story of Jim Elliot, who served God in Equador, bringing the hope of Jesus to tribes of Indians who had never heard. He (along with the other men he served with) were brutally killed by a tribe of these Indians and his story is told by the wife he left behind in the book The Shadow of the Almighty: The Life and Testament of Jim Elliot

. This story is also told in the movie End of the Spear

Jim Elliot has a well known quote that I love:

I am so inspired by young people who hear God so clearly and obey with abandon. I was definitely not that tuned in to God’s plans for me at that age, and too selfish to obey with that kind of abandon.

But I am meeting young adults who fall into the same category as Timothy, and these other inspirational young men of God.

They are applying to spend this summer in Eastern and Central Europe.

I’ve read the applications they have submitted, teared up at the pain some have endured in their short lives, cheered at the incredible things God has taught them in the few years they have been on earth, and thanked God (over and over!) for bringing these young lives to serve with Josiah Venture. And many of you are a part of making this happen!!

Who knows where He will direct them because of the things they will experience this summer?

I can’t wait to see!

We are in the “turn-in-your-paperwork” phase of the intern year. Every day, I open my email and read through health forms and insurance forms and payroll forms- making sure everything is documented. I file them electronically so that the leaders of the internships in each country will have access to them this summer. I’m emailing lots of account numbers and adding interns with “giving” links on the Josiah Venture website. We have just over 90 interns in process.

Soon, it will be the “arrange airline tickets” time of year, and this week I’m headed to Chicago for a meeting with JV’s financial group, Cedarstone, to learn more about payroll and student accounts. (Numbers are not my thing, so you can pray about that meeting!!!)

I love this work. It is such a perfect fit for me. A wonderful balance between organization and building relationships with these incredible interns. Thank you for making it possible for me to do this work!!!

I’m still working just part-time, and I really need to be at a full-time status soon. Spring is an incredibly busy time of year for us. My on-going support is gradually increasing, but I really need individuals and churches to be a part of monthly or annual support of my ministry. 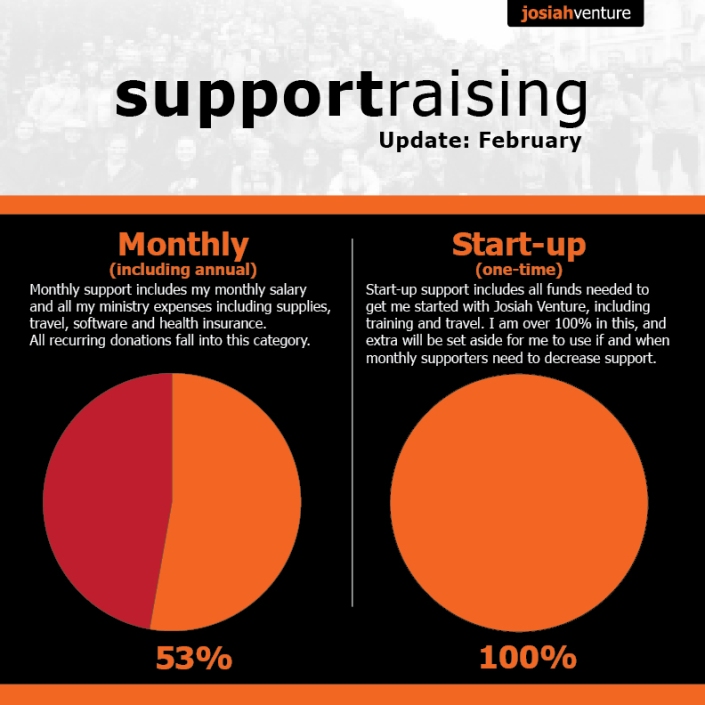 I’m SO excited to be over 50%, and I’m so thankful for each of you who are a part of making that happen! If you have been thinking about becoming a part of God’s ministry to these interns, and ultimately God’s ministry in the lives of young people in Eastern and Central Europe- sign up and join us! I have lots of plans for getting each of my supporters involved in what God is doing and I’d love to add you!

You can sign up here, or email me to have a response card sent your way (rvandenbosch@josiahventure.com)

For those of you who were a part of my time with the Navajo, I have a special prayer request this week.

Sonny, one of the leaders of the church, texted me this morning with news that his little grand-daughter, Mika, is very ill with a disorder called Langerhans cell histiocytosis (LCH). It is a disease that is rare, and will take awhile to treat- with radiation and possibly chemotherapy. She is at Phoenix Children’s Hospital, and he asked that we would pray for her.

Here’s a photo of Mika (in the pigtails) sitting on her Uncle Delbert’s lap.

Thank you SO much for your prayers and support in this and so many other areas. I’m so blessed to have each of you in my life!!!! Have a great week!!!!

“The LORD bless you and keep you;the LORD make his face shine upon you and be gracious to you; the LORD turn his face toward you and give you peace.” Numbers 6;24-26