The Amazing Race has Begun!

It has begun! All of our interns are finally here in Europe for the summer!!

We had 5 with a delayed flight that arrived about 3 hours into the race, and one completely cancelled flight that resulted in an intern arriving at 11 today (day 2 of the race). Thank you for praying!

The race began at the airport with a puzzle to unscramble, travelled into downtown Prague where they learned a Czech dance and came to the station I was manning, with our intern leaders from Ukraine… flicking a ping-pong ball up the 100 steps to Prague Castle, and counting them at the same time. 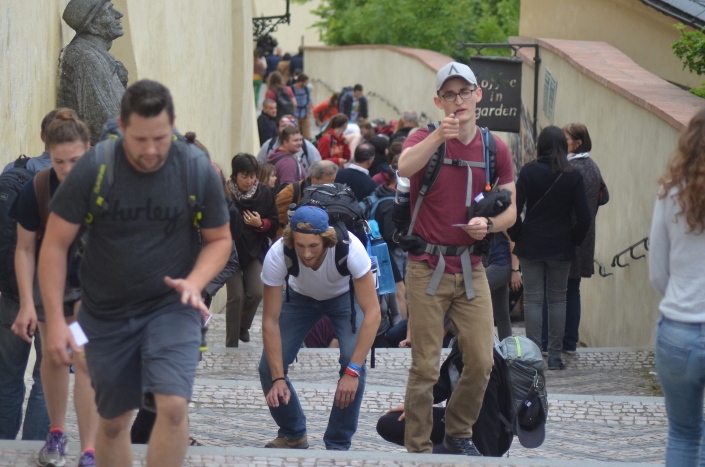 As you can see, it was a difficult task, and it took the teams a little over 2 hours, start to finish. Many of them arrived at the top and reported the wrong # of stairs. Back to the bottom to count them again! A few teams had to walk the stairs 3 times before they counted them right.

Then they had to find a JV staff person hiding around the castle grounds, play Bingo on the Charles Bridge, create a map of the solar system and ride paddle boats before bed. Team #1 was Albania/Romania.

Today they started in Prague with prayer, did a climbing wall, matched pictures of each Metro stop with the correct stop, memorized a Bible verse in Czech and came to us at the train station to buy tickets to our next city- Olomouc. We had set trains they could take- some were express trains and some were very slow local trains, which made things a little interesting. I was stationed with our travel agent, Regan and her friend Paula and we spent almost 4 hours waiting for teams to arrive. We left with the last teams and I had a great train ride getting to know “in person” some of our interns- loved it!!!

We arrived in Olomouc (the “c” is pronounced as an “s”, and when I face-timed with dad tonight he quipped, “Well, at least you’re Olomouc there!” )

My dad can make me laugh even at a distance… 🙂

The interns had to find staff in a large mall (we “hid” with the staff for awhile in a cute restaurant and got dinner), they had to carry a lighted candle across a park loaded with squirt-gun carrying JV staff, and they had to duplicate fountain poses.

I’m not sure the teams are all checked in yet- it’s about 10:30pm here and it wouldn’t surprise me if they were still racing.

Tomorrow we will finish the day at Malenovice. This is the hotel that all JV conferences are held at and everyone loves being there- so I’m excited to experience it for the 1st time.

Thank you for praying! I’m watching the bonds of friendship form in each team and it is a joy to think of all that God is preparing them for this summer! I’ve also been able to connect with so many of the people I’ve been working with and I have loved putting an email name together with a real live person! I’ve been asking them to tell me their stories and I wish I could share with you all that God has done and is doing through these individuals who are sacrificing so many comforts of home to reach young people with the good news of God’s love.

Last Sunday I attended Czech church in Beroun with Dave and Angie, and the sermon was about being fishers of men and how not everyone involved in fishing has a net in the water. There are many behind-the-scenes roles like mending nets, and building boats. This is the same in reaching the world with God’s love. I met SO many fishers of men yesterday and today. What we are doing together, you and I, is the behind-the-scenes work in this particular ministry. The recruitment, processing, paperwork, airline tickets, encouraging….

I am SO thankful for each of you that is making it possible for me to be here. As interns have hugged me and thanked me for helping them I wished you could feel those hugs too- because you are a big part of all they will do this summer for the Kingdom! 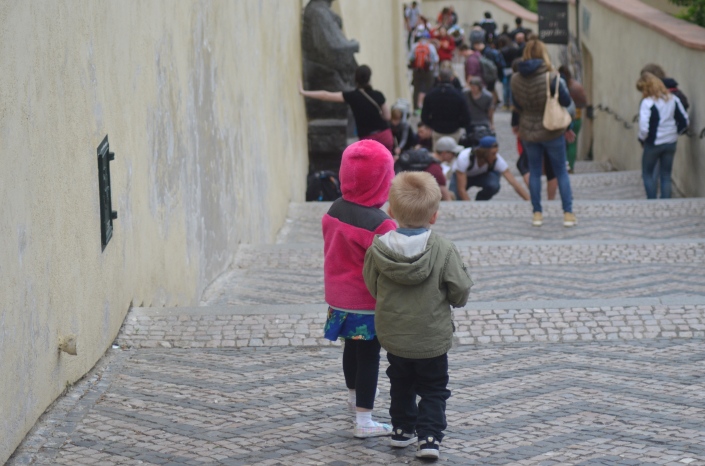 One thought on “The Amazing Race has Begun!”

Sweet!!! Love it! Have fun building up the Kingdom, y’all!!
#onwardukraine